We believe SAFEGUARD has all the qualities that will make a wonderful sire – pedigree, performance and physique.

SAFEGUARD was undefeated at two, including the Group 3 Kindergarten Stakes a race that has been won by horses such as HALLOWED CROWN, FURNACES, ASTERN and more recently BIVOUAC and DOUBTLAND all of which have become stallions.

At three he won the Group 3 Vain Stakes also won by SEPOY,  STARSPANGLEDBANNER, TOORAK TOFF, RUSSIAN REVOLUTION, JUKEBOX AND BIVOUAC, before going down narrowly in the Group 2 Danehill Stakes. He continued to race with distinction at stakes level before we purchased him off the track in preparation for the 2015 stud season.

And now SAFEGUARD's offspring are producing on the track! His first crop of 30 live foals has seen 29 named and 25 have raced for 20 winners (80% winners to runners!!) and has produced two stakes performers in Miss West Coast and Specialism. It is easy to understand how he won the 2019 WA 2yo Sires award as well as the WA First Season Sire award and ranking 7th in the Australian First Season Sires table.

He now has three crops and continues to produce results from relatively small foal crops. He has had 56 offspring race with 60.7% winners to runners and 9% stakesperformers to runners. His current crop of 2yo has already produced the stakes placed Policiere as well as the very exciting Written Exceed and Buzzoom. He has winners from 1000m to 1600m in all track conditions and his progeny are training on as 3 and 4 year olds.

The sales reecord of SAFEGUARD is equally impressive as he continues to sell 6 figure yearlings and always sits in the top few averages of the sales.

So whether you are breeding to sell or to race, SAFEGUARD ticks all the boxes!!

In setting his stud fee for the 2021 season, we have recognised that to succeed, stallions need both quality and quantity of mares, and so we have placed him at a price that should see him receive a significant book of mares. 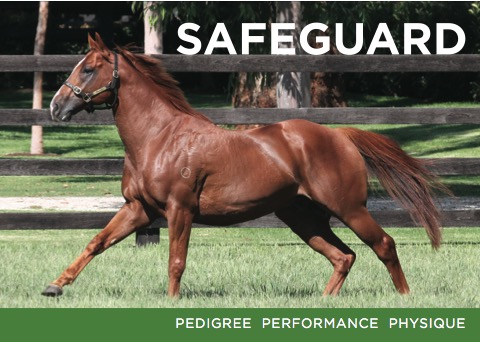